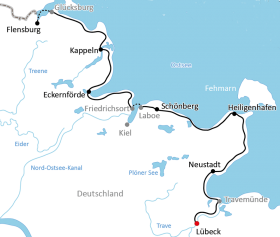 At a glance
Eating and drinking
There is a wide variety of cafes, restaurants and places to shop all along the cycle path. That is why we do not offer half board. An evening meal costs approx. EUR 15-20 per person. You can, of course, eat more economically or even more exquisitely. 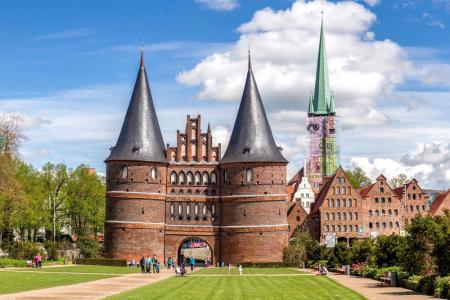 This section of the Baltic Sea Cycle Route takes you from the marzipan city of Lübeck to the rum town of Flensburg. In between the two, you’ll find lots of nature, picturesque towns and villages and probably the most beautiful sandy beaches east of the Caribbean. The bike paths are good, the local cuisine is excellent and the refreshing Flens beers in the evening will be well deserved.

Day 1 Arrival in Lübeck
Explore the old Hanseatic city, which is a UNESCO World Heritage Site and known for marzipan and the Holsten Gate.

Day 2 Lübeck - Neustadt i.H., approx. 45 km / 28 mi
The tour takes you along the Bay of Lübeck and to Neustadt, which supported pirates against the Hanseatic League in the 15th century and later built many ships for the Danish navy.

Day 3 Neustadt i.H. - Heiligenhafen, 60 km / 37 mi
Today you’ll cycle along the most beautiful sandy beaches and well-known seaside resorts such as Grömitz and Dahme on the Wagrien peninsula.

Day 5 Schönberg - Eckernförde, 50/55 km / 31/34 mi
You’ll cross the Kiel Fjord by ferry, then cycle on to the Danish Wohld peninsula. Until the Middle Ages it formed a primeval border forest that separated the Danes and Saxons.

Day 6 Eckernförde - Kappeln, approx. 45 km / 28 mi
The landscape you’ll visit today is called Schwansen and was once home to large farms with serf farmers. In Kappeln, the herring fence in the river Schlei is remarkable and the suburb of Olpenitz used to be an important naval base.

Day 7 Kappeln - Flensburg, 60 km / 37 mi, boat trip
Unlike Schwansen, the Angeln landscape was home to free farmers. To this day there is a mutual dislike between the two regions. In Glücksburg you can visit the famous castle, then you can either cycle or take a boat to Flensburg.

Day 8 Return or Extension
The tour ends after breakfast. If you like, extend your cycle tour on the Baltic Sea Cycle Route.

All prices apply per person in a double room, incl. breakfast.

All prices apply per person in a double room, incl. breakfast.